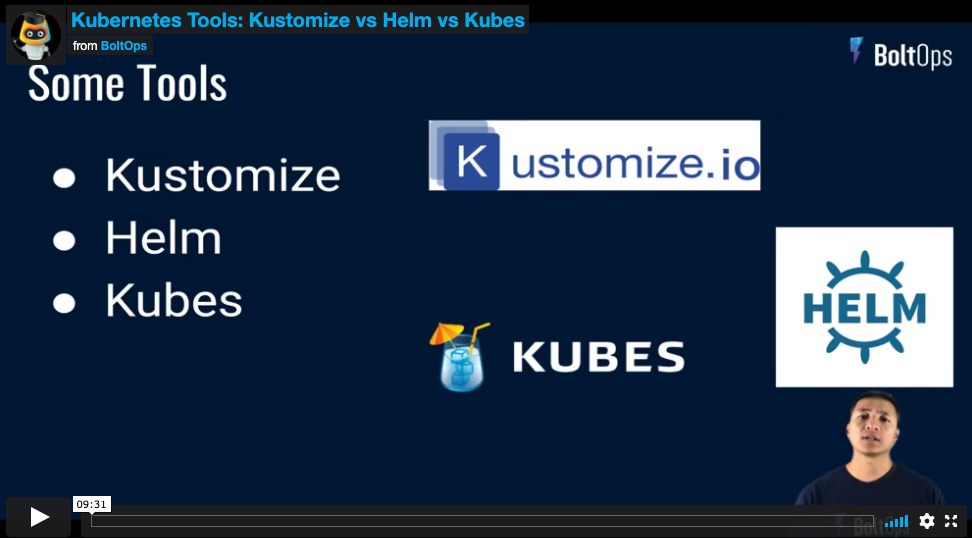 Kubernetes provides a great platform to run and manage Docker containers. The kubectl command is usually how you interact with a Kubernetes cluster. It does its job well and is quite a powerful tool.

With Kubernetes, you usually use kubectl commands to deploy Docker images and run them on a Kubernetes cluster. As you get your Kubernetes applications production-ready, you’ll have to answer many questions:

Most folks start off with kubectl commands to create their Kubernetes resources. It’s simple. It’s also important to learn how to use kubectl commands to establish fundamentals. Eventually, you grow tired of typing the same commands repeatedly, though. So you write a wrapper bash script. Example:

Bash shines for simple scripts and light glue, but it can quickly get messy as the script takes on more things to do.

One way to create different env like dev and prod is to copy their YAML files. Here’s a naive example structure:

We then write a wrapper script that selects the folder:

We’ve duplicated service.yaml and deployment.yaml, though. Instead, it’ll be nice if we use the same YAML and create a different env like dev and prod with it. Things like envsubst to replace variables from the same “template” YAML files can help. As requirements increases, the simple bash glue scripts end up getting messy.

Additionally, the Docker image is expected to be prebuilt. Because you must first build the Docker image, folks will usually write bash script that performs these additional steps and then glue things together.

Kubernetes has a large service area, and there are so many resource Kinds that we can create that it’s difficult for a simple wrapper script to handle enough control for your needs.

Kubes is a Kubernetes Deployment Tool that automates the following:

Kubes works transparently and straightforwardly. The deploy command simply do all 3 steps: build, compile, and apply.

To deploy and create multiple environments like dev and prod with the same YAML, we use a different KUBES_ENV setting:

The same code is used to create different environments. Kubes achieves this with a feature called Layering. The concept is similar to Kustomize overlays. Here’s the general layering processing order that Kubes takes.

Kubes support a variety of hooks run scripts at any part of the kubectl commands. This allows you to customize and add app-specific logic needed. Example:

Many companies roll their own custom solutions. Chances are that the kubectl wrapper scripts eventually grow into messy glue. Every time you go to another company, you must relearn and figure out the home-grown solution’s particularities. Even within companies, going from team to team, there may be different scripts that are their own unique beasts. It’s a science project.

Kubes provides a tool that streamlines the kubectl deployment already. Kubes also works in a transparent and straightforward manner. You know what’s going on. It’s also extendable and customizable. You can add business logic that you wish. Kubes provides convenient tooling and helps you get things done quickly.